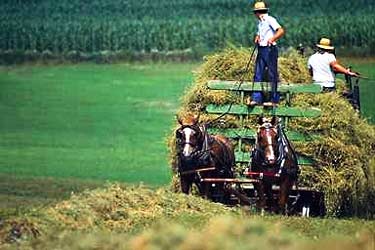 What makes the Amish such fertile ground for study on subjects such as weight loss is because they all live the same way they lived 300 years ago. They still plow their fields with horses, don't drive cars, use lanterns for electricity and only use telephones in a dire emergency. Their life expectancy is right at the US average even though they avoid modern medicine whenever they can...but the life expectancy of the Amish has been 72 or greater for almost 300 years, even when ours was 40 and they still eat like our ancestors did too, which is pretty much whatever they want. We don't recommend the Amish Diet, but there is much to be learned from the studies that measure their physical activity.

One recent study of the Amish, published in the official scientific journal of the American College of Sports Medicine (the largest sports medicine and exercise organization in the world), provides enormous insight into the relationship between high amounts of work-related physical activity and obesity. The study was designed to use the Amish, known for their physically demanding hard working lifestyle and living without modern technology, to determine how technology influences physical activity levels in modern society. Pedometers were placed on a large group of Amish farmers and their physical activities were logged for 7 days. Amish men recorded an average of 18,425 steps a day, Amish women logged 14,196 daily steps. By most standards 10,000 steps per day is required to be considered to live a "very active lifestyle". Other forms of physical activity were also measured and the findings were that the Amish performed 6 times more physical activity per day than a study of 2,000 participants in 12 modernized nations. Only 4% of the Amish population are obese as defined by a Body Mass Index above 30, whereas 31% of the US adult population is obese.

“The Amish were able to show us just how far we’ve fallen in the last 150 years or so in terms of the amount of physical activity we typically perform,” said David R. Bassett, Ph.D., FACSM, a professor at the University of Tennessee, Knoxville, and lead researcher for the study. “Their lifestyle indicates that physical activity played a critical role in keeping our ancestors fit and healthy.”

A normal Amish day begins with Breakfast that typically includes a stack of pancakes with syrup, scrambled eggs, sausages, hash browns, bread, butter and pie. Lunch: a taco salad with potato crisps, ground beef, shredded cheese, beans and canned peaches. And dinner: beef, gravy, potatoes, bread and butter, more gravy, followed by chocolate pie. The average person would not last a week on this diet without putting on weight.

WHEN DO MOST OF OUR HEALTH PROBLEMS BEGIN? 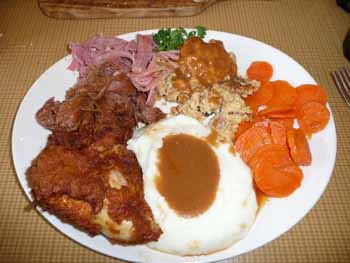 A portion of an Amish meal minus the bread, butter and desert.
Only 4% of Amish are obese compared to 31% of Americans!

Professor Thomas Sanders, the director of the Nutrition, Food & Health Research Centre at King’s College London and joint author of You Don’t Have to Diet!, says: “We’ve become sedentary. We sit at our desks all day, then go home and watch TV. These days there are more people watching sports, do it yourself makeovers and gardening programs than actually doing them. And yet if we kept our calorie intake in line with our expenditure, we could all be enjoying food the way the Amish do. In trials, there is no evidence suggesting that reducing fat intake has an effect on obesity. As long as your expenditure equals what you eat, you won’t put on weight, regardless of how high the fat content is in your diet.”

However, Dr Tim Bowker, the associate medical director of the British Heart Foundation, adds a cautionary note: “A high-fat diet, particularly one high in saturated fats that are derived from dairy products and fatty meats, will probably push up the cholesterol levels in your blood. It will increase the risk of heart disease, which may lead to a heart attack and, ultimately, death. If you are not expending those calories then you are going to start storing fat. And that, as we all know, is when the trouble begins." 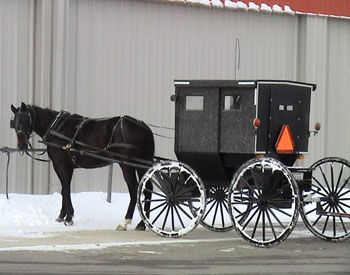 The Amish still use a Horse and Buggy for transportation

Carriers of mutations in one gene, called the fat mass and obesity associated (FTO) gene, present in nearly half of Europeans, are about 30 to 60 percent more likely to be fat. University of Maryland researchers decided to examine the FTO gene in the homogenous Amish community since almost all of them are of European descent. They found that, as with others of European descent, this gene did contribute to being overweight in the Amish community. But the excess weight was seen only in those individuals with low physical activity scores, mostly women performing house chores. The genes had absolutely no effect for those burning additional calories through several hours of moderately intensive physical exercise such as farming.

In this study physical activity even trumped diet. The Amish enjoy eating every part of the pig with gusto, along with gravy, potatoes and pies. And they get away with it. The Amish do have an advantage in that they burn more calories through exercise throughout their entire lives, and they are in effect nurturing nature. Not gaining excess weight is the easiest way to maintain a healthy weight. Yet at a very basic level the University of Maryland study reveals what is perhaps obvious to many: Population-wide obesity is a modern phenomenon. We carry the same genes as our ancestors did, but lifestyle changes have brought on the obesity epidemic. The lesson the Amish have for us all is that our bodies didn't change we did!