THE MYSTERY OF MARIN 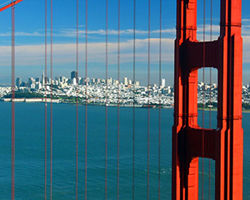 A View of San Francisco through the spires
of the Golden Gate Bridge from the Marin
Headlands.

Doubts linger about the underlying cause of the dramatic increase in breast cancer death rates that took place in Marin County, California roughly 10 years ago....

Marin County, California is one of the most breathtakingly beautiful and most highly desirable places to live in the entire world. Its cliffs and shorelines, harbor inlets, rolling green hills, houseboats, restaurants, vineyards and what seems like hundreds of miles of bike trails also make it an ideal place to enjoy a healthy Lifestyle. Marin ranks near the top in the country in Life Expectancy and has a very low incidence of heart disease, stroke and most major cancers. But it wasn't long ago that Marin was on the verge of becoming the breast cancer capitol of America. At one point Marin's breast cancer death rate was 20% higher than neighboring counties and by far the highest in the state. In places like Marin no stone is left unturned to get to the bottom of the problem. Surrounded by some of the most sophisticated medical facilities and research institutions in the world and with unlimited amounts of money to spend they investigated everything including the soil, the water and the ocean breeze before concluding the primary cause was a Lifestyle that included having children late in life and too much alcohol. Was Marin simply a victim of its own success?

Today Breast Cancer death rates are down in America and they are down in Marin too. Some of this success is due to advances in medical science and improved lifestyles. But if you accept the findings of the new Federal Environmental Cancer Study then citing only Lifestyle as the primary source of cancer problems, as severe as those found in Marin, become difficult to believe. According to Dr. Phillip Landrigan, director of the Children's Environmental Health Center at Mount Sinai School of Medicine in New York City..... "For the past 30 years there has been systematic effort to minimize the importance of environmental factors in carcinogenesis. There has been disproportionate emphasis on lifestyle factors and insufficient attention paid to discovering and controlling environmental exposures," he said. "This new report marks a sea change."

We could not be happier for the wealthy white women in Marin County, who appear to be able to put most of their Breast Cancer nightmare behind them. But we remain concerned about a series of statistics related to Marin during the period of time when this issue remained unsettled. Cumulative incidence rates (1988-2001) show that Hispanic women living in Marin at that time had higher rates of invasive breast cancer than Hispanic women in other areas of the San Francisco Bay Area and California. Hispanic women tend to have babies early in life and aren't known for drinking excessive amounts of alcohol. In light of the new Federal Report we can't help but wonder if this data was just overlooked or if these Hispanic women were consuming excessive amounts of alcohol and began having babies late in life too?  Tom LeDuc

Your Brain Surfing the Net