SOCRATES AND YOUR HEALTH 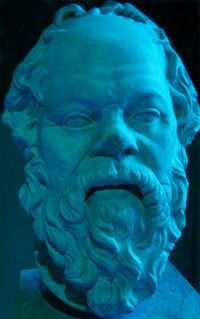 During a recent study of 14-18 month old children the researchers observed them helping each other time after time without expecting any reward, which led them to conclude that it's selfish behavior that is learned, we were born to be nice to each other. Albert Einstein said,"The value of a man is in what he gives, not what he is capable of receiving." Our research indicates we also tend to live longer when our lives have a purpose that extends beyond ourselves.

I'm a huge fans of Socrates and I believe he discovered the path toward giving through a process he referred to as self examination. One of the requirements of living a long and healthy life is to feel good about yourself and the Socrates brand of self discovery seems to apply to almost every area of my life. It is through his teachings I learned that the path to becoming a more giving person is inside you, not outside...it's how much of yourself that you give that matters. "Know Thyself" is one of his most profound mantras and it reminds me I feel better about myself when I am less self-absorbed.

"I do not think I know, what I do not know"...It was said during his time that "No Man Is Wiser Than Socrates," but Socrates himself believed it was his awareness of his ignorance that made him wise. Convincing those who claimed to have "knowledge" that they remained ignorant was the centerpiece of much of his fame. In order to understand Socrates you must accept that it was his "Knowledge of His Own Ignorance" that drove him toward self examination, which is how he learned of the inadequacies and inconsistencies in his moral beliefs. And it was this discovery that caused him to conclude that, "life without examination is not worth living."

Arguably his most profound "internal discovery," is the relationship between wealth and goodness. He defined it this way, "wealth does not bring goodness, but goodness brings wealth and every other blessing." It is through this belief that the "Socratic Method" was originally formed, but it goes well beyond that today. Now it is most often used as a form of questioning that allows one to accept there may be more than one correct answer to a question or even no correct answer at all. It is used in law schools to teach students to look for patterns instead of just memorizing the facts of a case, in psychotherapy to explore meaning and alternative actions and in human resource training to facilitate skills development, among a host of other things. I believe the most valuable day to day business use of the Socratic Method is far closer to what it was originally intended to be used for...the willingness to give before you receive.

TWO HEARTS BEATING AS ONE

LIFT YOUR SPIRIT IN PERU