THE POWER OF THE MIND... 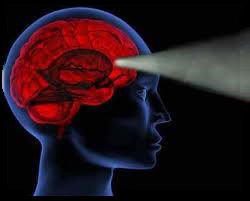 An abstract of the mind entering the Brain.

Recently, while searching for a way to comfort a dear friend, I found these words on an old legal pad, but haven't been able to track down the source. They are excerpts from a much longer article, written by a doctor several years ago, who is describing something he called, "the mind forcing its way through a broken brain." I decided to share this with you to honor the memory of my old friend who struggled with these issues at the end of his life and who passed away before I could share it with him... Tom LeDuc

Saturday morning the sun poured in as I checked the room. The bed was at chest height, made up and empty, with clean, fresh sheets over the vinyl mattress. As I turned to leave, I was blocked by a nurse, an older Irish lady with a doleful look on her face. She had taken care of David last night.

"He woke up, you know, doctor--just after you left--and said goodbye to them all. Like I'm talkin' to you right here. Like a miracle. He talked to them and patted them and smiled for about five minutes. Then he went out again, and he passed in the hour."

Two weeks later I saw Carol in the lobby. It was busy and very public. But before her last "God bless you," I couldn't help asking, "Uh. Carol, did ...?". She knew my question. With a wide, knowing smile, she nodded and said, "Oh, yes, he sure did." And I believed her.

But it wasn't David's brain that woke him up to say goodbye that Friday. His brain had already been destroyed. Tumor metastases don't simply occupy space and press on things, leaving a whole brain. The metastases actually replace tissue. Where that gray stuff grows, the brain is just not there.

What woke my patient that Friday was simply his mind, forcing its way through a broken brain, a father's final act to comfort his family. The mind is a uniquely personal domain of thought, dreams and countless other things, like the will, faith and hope. These fine things are as real as rocks and water but, like the mind, weightless and invisible, maybe even timeless. Material science shies from these things, calling them epiphenomena, programs running on a computer, tunes on a piano. This understanding can't be ignored; not too much seems to get done on earth without a physical brain. But I know this understanding is not complete, either.

I see the mind have its way all the time when physical realities challenge it. In a patient stubbornly working to rehab after surgery, in a child practicing an instrument or struggling to create, a mind or will, clearly separate, hovers under the machinery, forcing it toward a goal. It's wonderful to see, such tangible evidence of that fine thing's power over the mere clumps of particles that, however pretty, will eventually clump differently and vanish.

He describes his frustration that the wonders of medical science can't find the mind this way..."Like our own image in still water, however sharp, when we reach to grasp it, it just dissolves.....I cannot ignore the internal evidence of my own mind. It would be hypocritical. And worse, it would be cowardly to ignore those occasional appearances of the spirits of others--of minds uncloaked, in naked virtue, like David's goodbye."