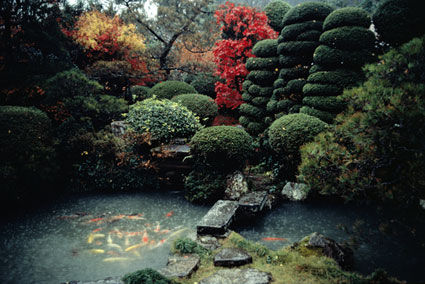 One of many versions of a Japanese Garden that may offer valuable
insight into why they have such a low incidence of brain disease.

All of us accept the fact that we have a subconscious mind and yet few of us make any effort to connect to it. The Japanese not only attempt to make contact with their subconscious mind they create special places that facilitate this internal exercise. One of these special places is the Japanese Garden and there is strong evidence that indicates they can play a powerful role in assisting us in calming our mind. Given the low rate of brain disease among the Japanese, taking the time to calm our minds may be a bigger factor in the health of our brain than we think.

The Japanese have the highest life expectancy in the world. One reason is their low incidence of Alzheimer's Disease. The age standardized death rate from Alzheimer's in America is many times higher than Japan even though their population is much older. This makes us wonder if a healthy brain isn't as important to their amazing longevity as their low incidence of heart disease. In the west we tend to think of the health of our mind as being separate from other parts of our body. We address brain disease when it occurs and rarely consider that the health of our mind deserves as much care as the health of our body. A new study related to this subject merits further review.

Researchers who observed the effects of Japanese Gardens on Alzheimer's patients concluded that they appear to relieve stress and calm the people who sit in them. There are many versions, but they found all "Japanese gardens have a point of view, sun and shade, and a meandering, natural flow for the eye."

Professor Goto, of Rutgers University, where some of the most meaningful studies were conducted, was so impressed with this information she even created a small Japanese garden in a room at one end of the Alzheimer's unit at the Francis E. Parker Memorial Home and introduced several of her patients to the garden during 15-minute sittings twice a week. In these brief exposures, "interesting things happened," the professor said. "Many of these patients don't know who they are...they can get very confused at certain times of the day. Yet immediately upon being in the garden they calm down, even if they were in the midst of screaming. They smile and stay calm for the rest of the day." She went on to say, "this was more effective than medications that can take time to work and leave patients listless. Japanese gardens can be very small and installed indoors. If they reduce stress, this could mean lower healthcare costs, less medicine, and fewer calls to the nurse. This could have huge implications." 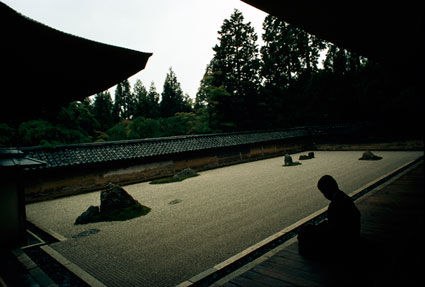 Another version of a Japanese Garden. This one is 500 years old.

According to the Rutgers news release at one point during the testing, there was a cricket singing in a chrysanthemum plant, "Ten days passed before the next garden visit. Yet when they returned to the garden, two of the four patients who had heard the chirping asked: "Where is the Cricket?"

"That these people could associate the cricket with the garden after one brief exposure--and retained this association for ten days--gave me goose bumps. The caveat is that in a rigorous sense, this has to be recognized as anecdotal, qualitative data. For right now, however, the results are a strong incentive for us to keep going."

If Japanese Gardens can have such a powerful affect on people with Alzheimer's what can they do to improve the health of everyone's brain? The lesson that Japanese Gardens seem to offer is that taking the time to calm our minds leads to a healthy brain and having a special place for that purpose makes calming our minds easier to do. We highly recommend you find a Japanese Garden near you and give it a try. Tom LeDuc