California RiceFOOD FOR MY HEART...

My mother was from San Francisco and my father was a real live American cowboy. I remember attending a few of his Rodeo's, but I had other ideas about how I wanted to spend my time. To me, the big red barn behind our house in the thriving metropolis of Wheatland, California, population 581 back then, was a great place to practice basketball and I used the pasture to shag "fly balls." But, that didn't stop him from trying to convert me. When he wasn't around he asked some of his more family oriented pals to look in on us while he was gone. They showed up bearing "gifts" such as a baby calf or a lamb for me to raise. The horses showed up later, after he passed away. My animals were my friends and I protected them. I saved them from time to time too, except for my best friend, "Yes." Apparently, as a young boy my favorite word was "No," so my mother gave me a pet duck and named him "Yes." One day my father showed up and decided to cook dinner. I had never tasted Duck before and haven't had a bite of it since...you guessed it, when I went out to the barn to say goodnight to "Yes" he was gone!

What I know about Family Farming I learned by "Osmosis" during my youth. I was off to the big city when I got out of school and returned mainly for the Holidays. But, I do remember the people I grew up with very well, including my father's wonderful friends. In my opinion they are some of the best Americans this country has ever produced. I think about them more often than I used to and I regret not staying in touch more often while I was away...we all need a dose of those values, especially in the America we live in today. I made contact with a few of them recently while doing some research on the nutritional value of organic food and I wasn't surprised by their level of sophistication on the subject. These boys didn't just fall off a truck, many are very successful rice farmers with advanced agricultural degrees. They and others like them have turned the counties within a 100 mile radius of where I grew up into one of the largest rice producing regions in the world. And they did it by being good stewards of the land they love. The notion that America no longer needs her family farms is hard for this "City Boy" to comprehend.

There's a reason your "Mom's Apple Pie" is the best you've ever had...a whole lot of love went into making it just for you. I understand the role mass produced food plays in feeding the world, but we have to feed each other too. Food is more than just nutrition, it's part of our culture and the American way of life. Locally grown tomatoes and a fresh ear of corn taste better, which makes us feel healthier and that has to count for something and that's what most family farmers do. They produce fresh food for their families and their local communities. Some are large enough to export what they produce to foreign countries, but most aren't. They're just good people, who love the land and take care of it, so they can pass it on to the next generation. My view is healthy soil has to produce healthy food and I prefer putting the folks that partner with nature in charge of what I feed my body.

The other reason this old cowboy eats as much locally grown fresh food as he can is because it reminds me of home and that's good for my Heart. I highly recommend "free range chicken" too, but please try to leave the "Free Range Ducks" alone!   Tom LeDuc

THE KINGS OF AMERICAN SUSHI 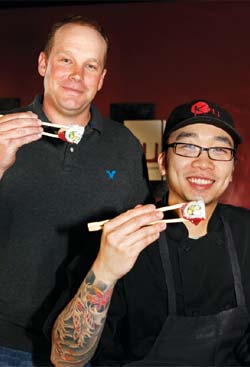 American Family farmers do more than just milk cows. They actively promote their own products and are a vital part of our economy... The boys from Wheatland High School and the surrounding counties are serious players in the national and international Rice Farming Industry, which means between them and others like them it is in very capable hands. A High School friend, Michael Rue, owns Rue and Foresman Ranch. His father and John Foresman founded Rue and Foresman Ranch in 1946. Michael now carries on the family tradition and intends to pass it on as well. He's an attorney and a world class rancher and farmer who is actively involved in exporting California rice around the world. He is also a member of the California Rice Commission Board. His stepson, Michael Bosworth, in the image to the left has an advanced agricultural degree and promotes Rue and Foresman Ranch rice and organic products to local restaurants in addition to the other roles he plays in running the family business, which is a very serious enterprise. He also founded www.nextgenfoods.com which helps other local family farmers leverage the freshness of their food by assisting them in selling their products online.

My college roommate Don Bransford not only farms rice, but prunes and almonds as well. He's been the Chair of the California Rice Producers Group, past Chair of the California Rice Commission and the Northern California Water Commission. He was appointed to the State Board of Food and Agriculture in 2006 and named the USA Rice Federation's Rice Farmer of the Year in 1999. He was also awarded the Lifetime Achievement Award in the U.S. Rice Industry in 2005. He has a degree in General Science from Oregon State University and a Doctorate in Exercise Physiology from the University of Tennessee. Quite a fella in my opinion...and he and his wife Diane are leaders in their local community too.

In the image to the left Bosworth and Ngo have formed a resourceful partnership, each of them seeking knowledge about the other’s area of expertise. Bosworth is learning how to make sushi—mostly for the fun of it—and Ngo is learning more about the rice that’s essential to his menu. There is something else essential in this image as well and that's the relationship that's being formed between two new American Entrepreneurs and that ought to fill every American's heart with something that's in short supply at the moment...a belief in our future!