CAN THOUGHTS OF DEATH IMPROVE YOUR LIFE? 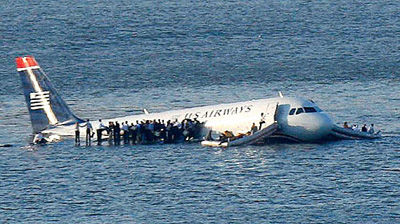 The Miracle on the Hudson...155 passengers
on Flight #1549 were certain they were going to die

None of the 155 passengers expected the "Miracle on the Hudson" to happen. According to most accounts serious thoughts of death entered their minds when the engines went silent and they saw the icy water of New York's Hudson River directly ahead. When "Captain Sully" uttered the words, "prepare for impact," they were certain they were going to die. What thoughts went through their minds as they prepared themselves for death and how did the miracle that saved them affect their lives? One passenger said the image of his 6 year old daughter dominated is mind. What would happen to her when he was gone and why was his opportunity to be a good father being taken from him...

Feelings of relief and gratitude overwhelmed him once he knew he survived and it wasn't until a month later, while attending a recital his daughter participated in, that his thoughts returned to what went through his mind as the plane went down. As he described it, she may have been the least gifted child on the stage that day, but just watching her caused him to sob uncontrollably even though he was sitting in the middle of a large crowd. He said it was during this moment he discovered how thoughts of death can help prepare you for life and from that day forward he began living his life differently, thinking more about others and less about himself. He put it this way, "My Number One Goal In Life Is To Be a Good Father, everything else flows from that." 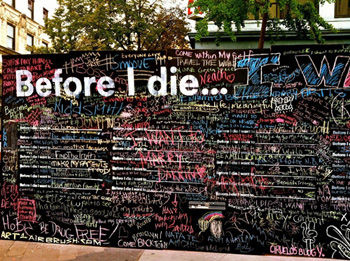 Losing a friend or a loved one can cause you to re-think your life...One person experienced death another way when she lost her best friend. It had such a profound impact on her, she felt paralyzed and was unable to get on with her life. So she decided to create Public Spaces that explored the hidden landscapes of near death choices to allow others to help her recover from her loss. Using abandoned buildings and blank walls as her canvas, she asked one simple question, "Before I Die I Want To," and provided chalk for people to provide their answers. To her surprise when she visited her first "Site" a day later the entire side of the building was full of responses.

Understandably some were funny. One guy said he wanted to experience being a "Pirate," before he dies, another said he wanted to straddle the "International Dateline." Only a small percentage wanted a bigger house, a better car or to make more money. Most expressed a desire to live more fulfilling lives that included spending more time with family and helping others less fortunate than themselves. Inspired by the fact that such a high percentage of people took her idea so seriously caused her to believe she wasn't losing herself in processing her grief...she was preparing herself to lead a more meaningful life. She continues to create public spaces that facilitate the opportunity for people to influence each others lives and it began by asking one simple question, "Before I Die...?"

Makes sense to me...how about you?  Tom LeDuc