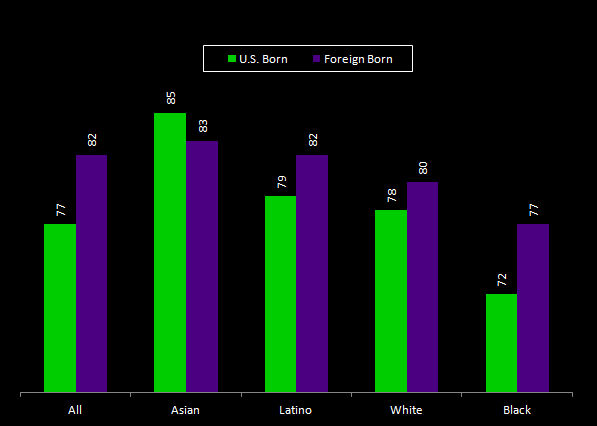 California is one of the most ethnically diverse places on the planet which is why we used it as an example.
One of the reasons it is so interesting is total U.S. born and foreign born life expectancy is an exact match to the U. S. as a whole.

Immigrant populations often have higher life expectancies than the native born in the countries they live in, but few countries in the developed world have greater differences than the United States. By many measures, those who immigrate to the U.S. are healthier than U.S. born residents even though in many states the odds are stacked against them. State level comparisons show that, on average, immigrants enjoy lower rates of various chronic diseases than their native born counterparts and have longer life expectancies (82 years vs. 77 years). Possible reasons for these differences include the self selection of healthy people to immigrate, the maintenance of healthy diets and behaviors, and the existence of immigrant networks that provide information and informal health care. Largely because of their lower use rates, immigrants incur lower health expenditures than natives. California is a great example...In Los Angeles County, 25% of immigrants have never had a medical checkup, and 11% have never been to a doctor. Among the native born in the county, the respective figures are 13% and 5%. Use rates are even lower among illegal immigrants in the county, 32% have never had a checkup and 17% have never been to a doctor. To see life expectancy by race for all 50 U.S. states: Click Here

Nationwide, per capita immigrant health care expenditures are roughly half of those for natives. This is true overall, for the uninsured, and for the publicly insured.  Health care expenditures among immigrant children are 74% lower than among native born children. The exception is emergency department (ED) visits for children:  Although foreign born children have fewer ED visits than native born children, their overall per capita ED expenditures are more than three times higher. Immigrants pay more of their own money for health care. In Los Angeles County, 21% of the medical costs among immigrants are paid for with public money, compared to 28% among the native born. Because of their lower rates of health care coverage, immigrants pay 28% of their costs out of pocket, compared to 20% for the native born.

America's life expectancy ranking is far lower than we would like it to be compared to the rest of the world. Our ethnic diversity works for us and against us in this regard. Asians are the longest living people in the world. In our opinion there is no place on earth where Asians live longer than they do in the United States, so maybe some folks just live longer here regardless of where they were born.  Tom LeDuc