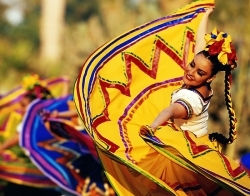 According to an October 2010 report released by the US Center for Disease Control the "Hispanic Paradox" has been resolved. The report shows that life expectancy for Hispanics living in the US is 80.6, compared to 78.1 for Non-Hispanic whites and 72.9 for non-Hispanic blacks. Overall, the life expectancy at birth for all Americans is 78.1. Speculation has surrounded this data for a long time because it was considered unreliable, but now it is official and going forward Hispanics will have their own category alongside blacks and whites...paradox resolved? If so, then a whole bunch of other "paradoxes" will take its place.

The phenomenon continues to seem paradoxical in the minds of some because on average the Hispanic population has a lower socioeconomic status than the non-Hispanic white population, less access to healthcare and higher unemployment rates in many parts of the country, all factors that are supposed to reduce longevity. On the flip side they are not heavy smokers, have strong social support networks and those who immigrate tend to be young, healthy and have a strong will to survive.

The data is inconclusive regarding exactly how to define "Hispanic." Despite what most people in the west tend to think they aren't all from Mexico, but if they were the increase in life expectancy for a Mexican male living in America would be almost 5 years and roughly 4 years for a female and that's just their life expectancy at birth. The report shows their life expectancy exceeds non Hispanic Americans at almost every subsequent age.

We say good for them, we're glad they do so well here. But they aren't alone, the Japanese and others live longer here too. As we study the data the paradox that remains in our minds is if our diet is so bad and our healthcare is so poor how do they "pull this off?" Lifestyle is a longevity factor, but it is hard to imagine their diet being superior to ours, whether they live here or there. They tend to be at least as overweight as white's and have a higher incidence of Diabetes and Heart Disease, but they die less frequently from both.

The other thing we find puzzling is that science continues to take a firm stance that there is no biological difference between the races. Does that mean we don't have to give up "Mexican Food" when we're trying to lose weight? The data we see continues to support the fact that it does matter where you are from, where you live now and whether you did a good job picking your parents. The Hispanic Paradox certainly seems to support that point of view. More study is required and a good place to start is to get a better set of Maps. Take a look at these and see if you think we are all biological equals: Click Here

Your Brain Surfing the Net