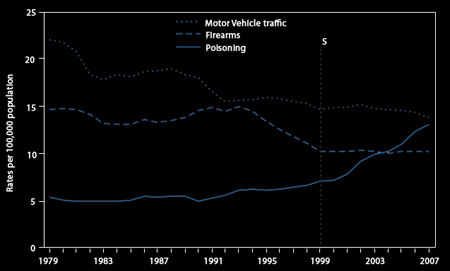 When most of us think of accidental poisoning, we think of a child getting into the medicine cabinet or taking a big drink of the "Drano" stored under the sink. Those days are gone...Any substance can be poisonous if too much is taken. If the person taking or giving a substance did not mean to cause harm, then it is an unintentional poisoning. According to the Centers For Disease Control and Prevention, nearly 82 Americans die as a result of unintentional poisoning, and another 1,941 are treated in emergency departments every single day.

What we find so alarming is the stages of life when the vast majority of unintentional poisoning deaths occur...in 2007 unintentional poisoning was the leading cause of death from all causes for ages 35-44, the number two cause from 25-34 and the third leading cause of death from 45-54. It's taking place most often well beyond the age when we should "know better" and before our judgement begins to decline.

Death by injury is the broader category, including intentional and unintentional. If it is intentional it is most often counted as suicide. The Poisoning deaths cited here are strictly unintentional and include those resulting from drug overdose, other misuse of drugs, and those associated with solid or liquid biologic substances, gases or vapors, or other substances such as pesticides or unspecified chemicals. In 2007, the three leading causes of unintentional injury deaths in the United States were motor vehicle traffic, poisoning, and firearms. The age-adjusted death rate for poisoning more than doubled from 1979 to 2007, age-adjusted death rates for motor vehicle traffic and firearms decreased during this period. From 2006 to 2007, the age-adjusted poisoning death rate increased 6%, whereas the motor vehicle traffic death rate decreased 4%...and it's still growing, which is an alarming trend to say the least. The problem is so serious when we first began looking into it we thought it might even be connected to the food supply...upon further investigation incidents related to food are relatively rare compared to prescription drugs.

One study done in 2005 reported methadone deaths had skyrocketed to 4,462 from 786 in 1999, an increase of almost 500%. According to Leonard Paulozzi, of the National Center for Injury Prevention and Control, the spike in deaths isn't linked to the liquid form of methadone taken by addicts to control cravings, it's the methadone prescribed to treat chronic pain. But the problem is much larger than one poorly prescribed or poorly managed drug, there is an urgent need for education about the dangers of drug overdose including the combinations they're taken in. Drugs can be lethal whether they're taken at home or on the street and while we're all aware of the dangers, it's clear more needs to be done...we simply cannot allow accidental poisoning to be the leading cause of death in the prime of our lives. Tom  LeDuc

We built a tool to assist you in adding some clarity to your thinking on this subject by allowing you to compare deaths by poison at various ages to the top 50 causes of death. You can see the data for the country as a whole and then navigate to your state to see how big the problem is where you live: USA Causes of Death by Age and Gender